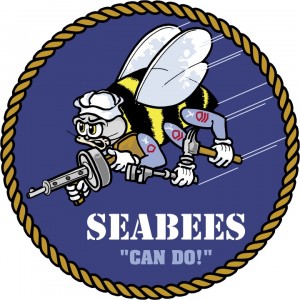 To understand the importance of Uncle Clarence in my life, you need to be acquainted with him. He was my mother’s oldest brother, fourteen years older. Very early in her life, he left home and went to Panama and, according to family legend, worked on the Panama Canal.

During World War II, he was one of the 325,000 men who served with the Navy Seabees a branch of the service that constructed landing strips, hospitals and anything else the other fighting services needed. He served in the Pacific where the Seabees landed soon after the Marines and often operated under fire. After the War he spent time in Alaska.

His adventurous spirit was a marvel to a young girl growing up in the far northwestern corner of Cimarron County, the last county in the Oklahoma panhandle. We lived fifty miles from any town in any direction, and had to travel eight miles on a dirt road to reach a highway. As a result, our trips to town were carefully scheduled and planned to minimize the cost and to make any outing serve multiple purposes—grocery shopping, doctor’s visits, a stop at the Farmers’ Co-op.

For some reason, my Uncle Clarence liked me. Unexpected gifts arrived in our old silver mailbox without connection to any special day. One time he sent a box of salt water taffy from somewhere on one or the other coast. A huge photo of a Kodiak bear from him was on my wall all during my childhood. Another time he sent sea shells, small brown and cream colored bits of the ocean. They arrived in a pipe tobacco tin and forever held that evocative scent.

I remember him visiting my parents and sitting with them on the large front porch that covered the front of our house, a square silent man with his pipe either in his mouth or cradled in his hand.

One summer when I was eleven, he came and somehow during the flurry of activity brought on by his arrival, the question of watermelons came up. I remember my step-dad’s sorrow that the watermelons in our garden hadn’t matured enough to be edible.

This was not a problem for Uncle Clarence. He loaded me into his car and with no preparation, no other list of tasks, no reason other than getting a watermelon, we were off to town, fifty miles away, eight of those miles on a dirt road.

Two things stand out in my memory of that shining afternoon. Uncle Clarence let me drive his car for a while. That was awesome. Remember, I was eleven. The other thing that stands out about that impromptu trip is what it taught me about life.

Life doesn’t have to be hoarded like a miser with his money. It is there to be lived, to be grabbed and savored. To this day, my husband and I grab special moments whenever we find them. We followed his great grandfather’s Civil War diary. We drove 1200 miles to sit for a couple of mornings in an Operation Migration blind to watch the training of baby whooping cranes. Recently we had another Uncle Clarence moment, not a major moment, but a special one.

My daughter and her family had just left after a wonderful Christmas visit. I tend to be really down when any of my family return to their own lives. My husband knows that about me and said, “Let’s go to Salida.”

Uncle Clarence rode with us that day as we drove Highway 69, passed Cotapaxie and followed snow-packed Highway 50 through Bighorn Sheep Canyon and into Salida. According to the sign on Main Street Westcliffe, Salida is fifty-seven miles from Westcliffe. Our only purpose for this trip was to buy not a fine big watermelon, but a small decorative leather elephant bank that I’d wanted but didn’t buy when we shopped before Christmas. We bought the bank, stopped for gas and returned home. Nothing else. No groceries. No dentist visit. Nothing.

Uncle Clarence would have chuckled in that quiet way of his and been proud.