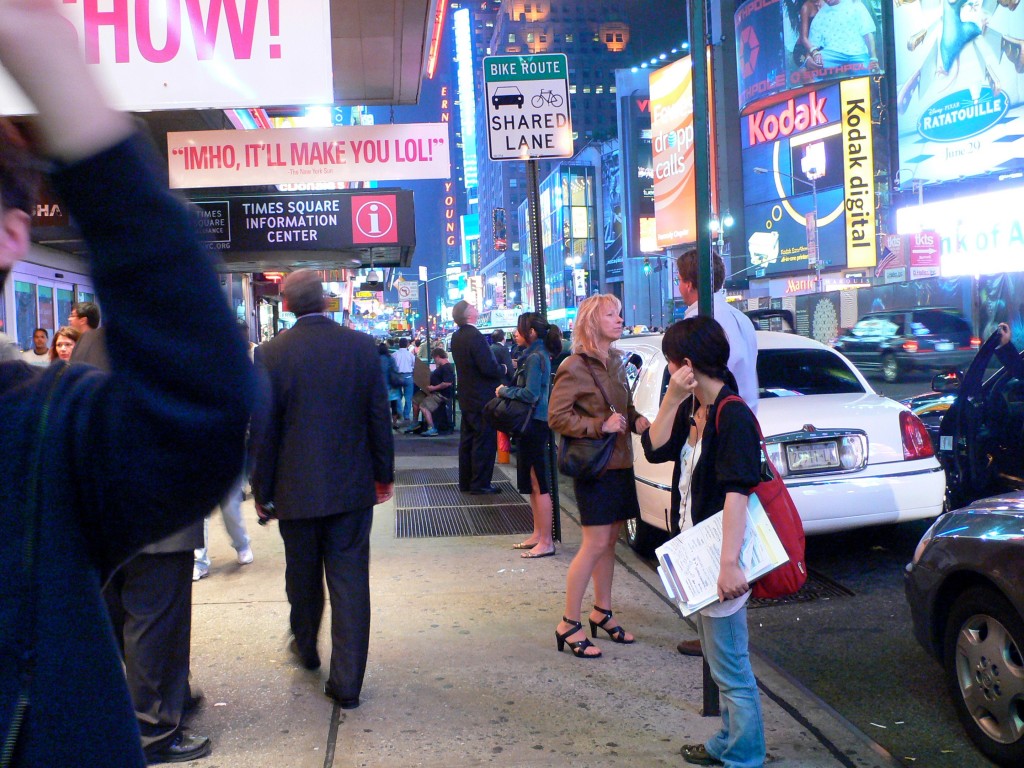 One item on my husband’s Bucket List has been for many years to see the taping of the David Letterman show. On a recent trip to see our daughter in New York, a friend of hers was able to score four tickets for us to a Wednesday taping. The information about the tickets emphasized that we HAD to arrive by 3:15 p.m. or all bets were off.

Normally, a trip from my daughter’s apartment uptown to the theatre district takes somewhere around thirty to forty-five minutes depending on the traffic. We met at 2:00 and caught a cab, sure that an hour and fifteen minutes would be plenty of time to get to the theatre, get checked in and be ready for this exciting experience.

LESSON #1 If something can go wrong, it will.

One of the hazards of living in a city of skyscrapers is the risk of falling ice after a bout of bad weather, a danger that rarely occurs to either natives or visitors, . We’d had the bad weather, and sure enough the mega ice chose that very afternoon to break loose from the nearly completed World Trade Center building and come crashing down, putting pedestrians, bikers and passengers in cars at risk. The West Side highway, our best and quickest path to the theatre district, was closed because of falling ice.

LESSON #2  When doing ANYTHING in New York, double the amount of time you think you’ll need to do it.

New Yorkers are wonderful people. They are also people in a hurry. Time is money. Money is essential. Even the transplanted Okies and Texans and folks from New Orleans soon take on the New York attitude. Anytime a person ventures out, he is immediately in competition for limited sidewalk space or the yellow cabs and frequently encounters shining examples of the New York attitude.

It immediately became obvious that we might have waited a bit too long to start our assault on the New York City traffic. As a result, tension swept over the four of us. We had to arrive at the theater at the noted time, 3:15, or we would miss our lovely afternoon.

Suggestions of possible routes were given to the cab driver which he was not at all happy to receive, but he rose to the occasion.

As the clock ticked and the mass of traffic that normally flooded the West Side Highway now clogged and shut down the ancient and narrow streets that comprise the tip of Manhattan. our driver shoehorned us through impossible fractures in the traffic. We narrowly missed a foolish woman in a hurry who darted from in front of a stopped bus. A harrowing hour later, without a single scrape or dent although we missed several of those by inches, we arrived a block and a half from the theatre at 3:12. Our daughter and her husband leaped from the cab and sprinted toward the theatre while we remained with the cab to the corner and paid the bill.

At the theatre, our troubles were still not resolved. Our daughter’s name was not on the list for our admittance to the show. For a terrible moment it seemed that we had made the Herculean effort to get to the theatre only to be told to return another day. Then the blonde, happy looking woman who was helping, returned with the word that for some reason her list of names was for a date in March instead of today’s date. We were on the list after all. After examining our IDs, she gave us tickets with “VIP” scrawled on the back in black marker.

LESSON #3  It pays to know the right people.

A young woman seated us VIPs in the lobby in front of the peons who had gotten their tickets the regular way and proceeded to warm up Letterman’s future audience. She explained  what was expected of us as important participants in the show. She lead us through practice cheering and laughing. Under absolutely no circumstances were we to whistle and yell “Wooo Hooo” like Okies do at ballgames and rock concerts.This is like saying “Don’t think about sex.”

Our VIP tickets earned VIP treatment in other ways. We were seated first. My husband had an aisle for his long legs. I didn’t have to navigate stairs. We watched in comfort as the other seats were filled.

Next, we watched a video with Alex Baldwin that repeated what the girl had told us but in a humorous manner–Laugh whether we think it’s funny or not; cheer and yell and clap but no whistling or “Wooo Hoooing.”

LESSON #4  Whistling and “Wooo Hoooing” are, apparently, hell on the sound men’s ears. Don’t do it.

The band came out and blasted (strike blasted, insert entertained) us with rock music. Paul Shaeffer came out and took his bow, and then, finally, the man who has been our late night destination for many years, David Letterman, came out and talked with the audience before the taping began. Three people had questions for him. The last man asked for an apple and the staff scrambled to get him an apple. Then through the show Dave made references to the apple and the guy who’d asked for it.

LESSON #5  If you haven’t yet achieved your own personal fifteen seconds of fame, come prepared with an off-the-wall question for Dave and maybe you’ll get it.

The lineup of guests included a snowboarding Olympic champion and the Oscar winning  supporting actress from TWELVE YEARS A SLAVE. They were charming and entertaining but the real show was technical work done in full view of the audience. These men and women wandered in what seemed to be an aimless fashion all over the set during the breaks. Dave conducted conversations at his desk. Workers milled around him. Cameras were moved and adjusted, one young man collected or organized Paul’s music, the band performed for us while the audience at home was bombarded with sales pitches. With no visible effort, the set was prepared for the next segment. One blink of the lights brought our cheer leader pacing back and forth on the front of the stage, urging us to even greater feats of clapping and laughing, and the show was off and running to the next commercial break. The precision movements of the technicians as they adjusted lighting, moved cameras, changed the set and took all of us through the one-hour LATE NIGHT WITH DAVID LETTERMAN show that took at least an hour and a half to film was remarkable to watch..

Cameras and recording devices were forbidden under threat of being ejected from the show, so I have no photos to share. You’ll just have to go and see for yourself the interesting behind the scenes show within a show.

We’re home again with another item crossed off of my husband’s bucket list. Our wild ride through the very heart of the city took us through streets we’d never been on before. Dave Letterman continues to be a consummate entertainer.

LESSON #6  If you get a chance by all means go online to get tickets for the taping of the Letterman show at the Ed Sullivan Theatre at     http://www.cbs.com/shows/late_show/tickets/request/

I guarantee you’ll have a delightful and unique experience.