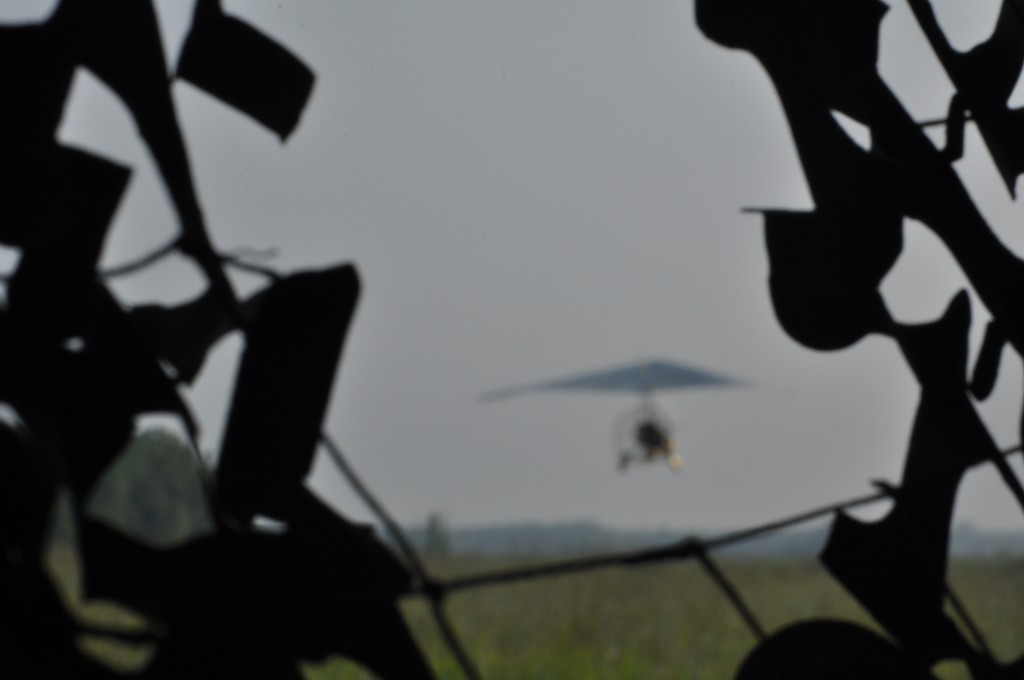 After driving twelve hundred miles from the Wet Mountain Valley of Colorado to the White River Marsh Wildlife Area in Wisconsin, we looked out at the grey cotton wool of the fog and felt distinctly uneasy. We’d come to watch the training by ultralight planes of young whooping cranes, a project of the organization, Operation Migration. Now it was possible that no training would happen that day.

The night before, we had driven the route to where we were to gather for the training, but that morning it was like driving through an alien landscape with the fog thick around us. Landmarks shifted and morphed into something else again and distance was unreliable.

Operation Migration’s reason for existence is to reintroduce whooping cranes back into their natural habitat and teach them how to follow their ancient migration paths, an instinct that is lost in cranes hatched by humans. Only around six hundred wild whooping cranes remain, a number that leaves the species precariously balanced on the knife-edge of extinction. This year in the White River Marsh area only thirteen chicks or colts as they are called were hatched in the wild. Of those thirteen, only one survived. The crew from Operation Migration is determined to give a much needed helping hand by rearing cranes in a protected environment and re-introducing them into the Eastern flyway.

The organization has a great web page at  http://operationmigration.org/. It contains wonderful photos as well as a history of the organization and its goals, and biographies of the conservationists who have taken on this task. It also hosts a webcam where even if you can’t travel to Princeton, Wisconsin, you can watch the training of the beautiful young birds via the magic of streaming video. Be warned: the training happens VERY early in the mornings.

We found the gate where we were to gather and parked. After about fifteen minutes a gray van arrived and Joe Duff, the CEO of the organization, climbed out and came over. There would be no crane training that day. Bad wind currents in the upper air, and a large storm cell heading toward the marsh made flying the ultralights too risky. When another car arrived with a Minnesota man and wife birding team (both wore binoculars around their necks) we caravanned behind Joe to the hangar where the four ultralight planes are housed. 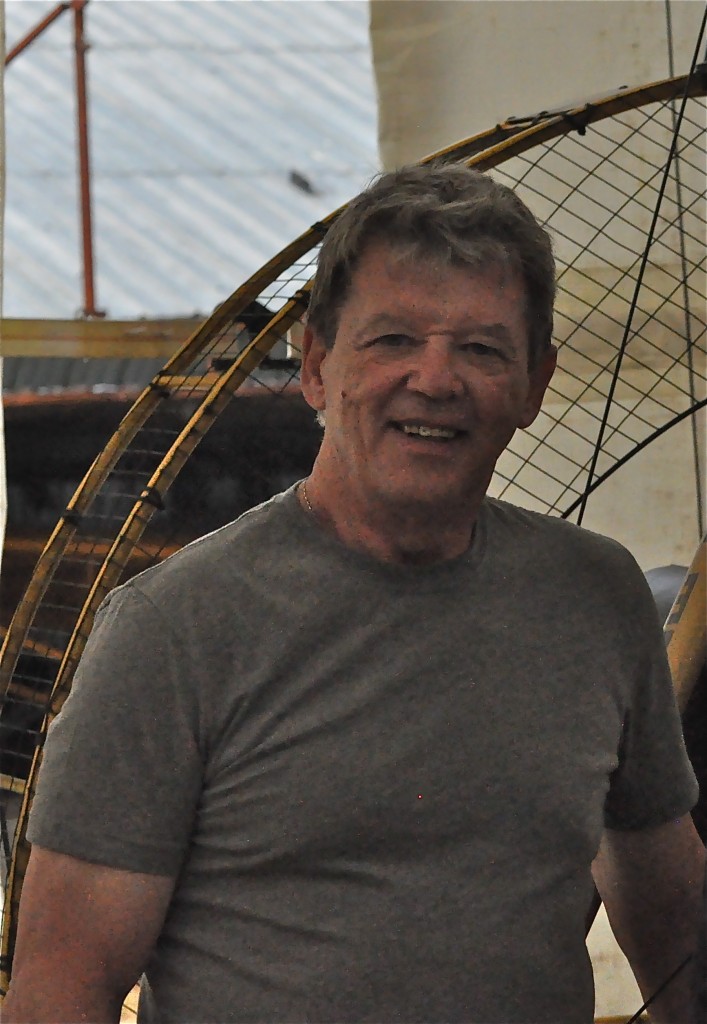 The ultralight planes or Trikes are VERY small and VERY fragile-looking. Joe  told us about them and at one point said, “The ultralight is like a canoe, a graceful and reliable craft on a river or lake, but not suited to the ocean.” He went on to assure us,  “We’ve had no injuries. We had a motor problem but it was a non-event. The plane flies at a slow speed, it can land on a hundred foot footprint, and we just don’t fly in bad weather.” These are the vehicles that lead the young whooping cranes on their twelve hundred mile journey from Wisconsin to Florida. 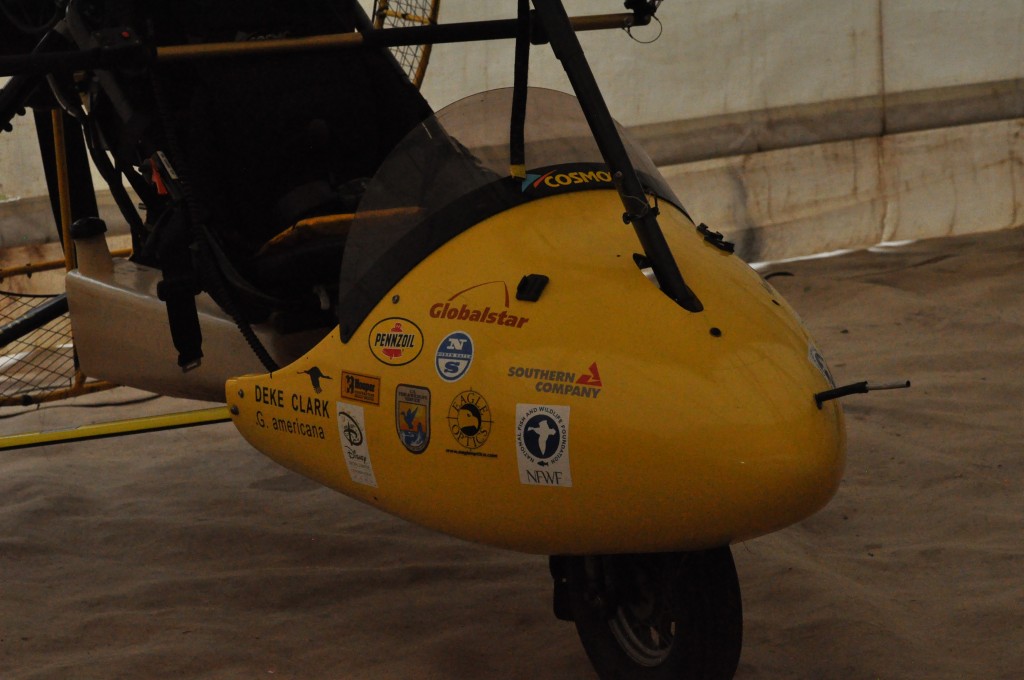 The birding couple from Minnesota had to continue their trip. We were more fortunate since we had come to the area for the sole purpose of seeing the training of the cranes. We had reserved our place in the blind for two days, and when no training happened on Monday, we still had Tuesday.

Tuesday morning was just as foggy and drizzly and yucky as Monday had been but we drug ourselves out of bed at 4:30 and were waiting at the gate by 5:40. This time it was Tom and Geoff who arrived, followed soon after by Brook Pennypacker who would join us in the blind as a watcher. Although the weather was foggy still, there was no wind. Tom checked weather again, then  opened the gate and led us through it and down a long narrow track to a small open space where we left our cars. 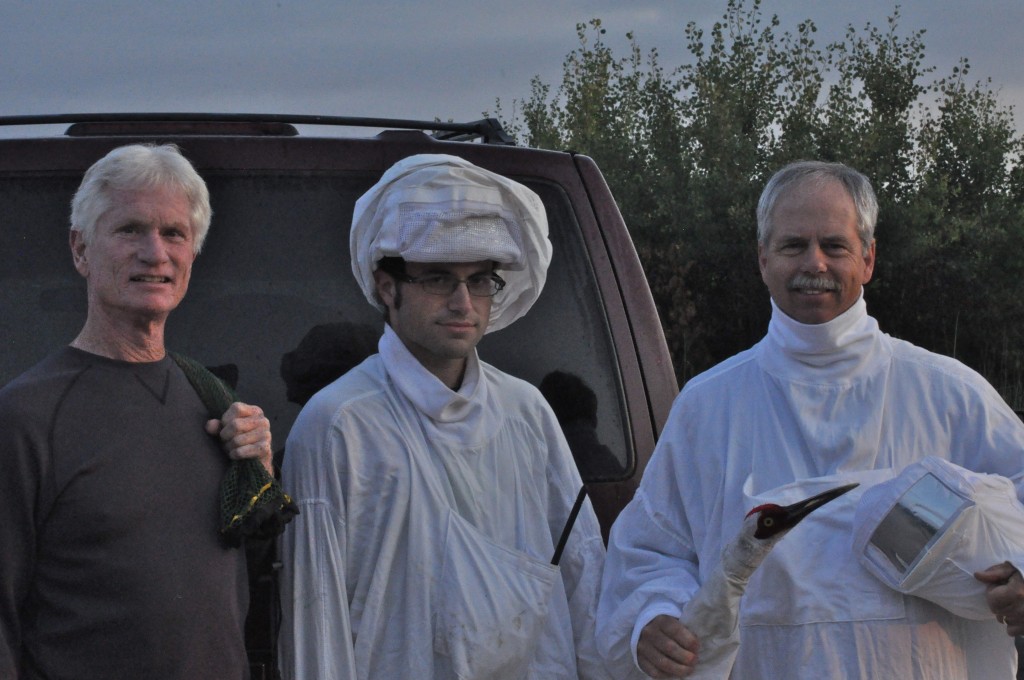 Once we parked, Tom and Geoff got out and retrieved white gowns and white helmets from the trunk of their vehicle, and pulled on rubber boots. Note the crane head puppet that Tom is holding, an important piece of the training equipment.  Looking like misplaced angels or members of some strange religious order the two men headed down one path toward the pen where the cranes are kept. Brook, our escort, took us down another path into the trees to the blind. 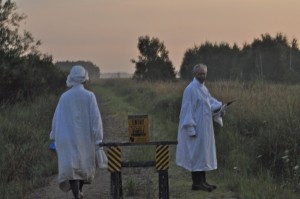 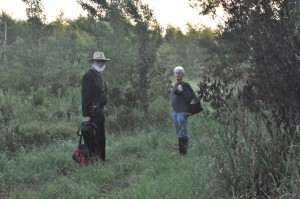 The blind was a tall box, probably seven or eight feet square, painted a dark color and covered with military-looking camouflage netting. I had a bench to sit on and a small hole to shoot through but many of my photos from that first shoot had bits of black camouflage netting hanging into the frame. Fortunately, we returned on Wednesday to  see another training session. 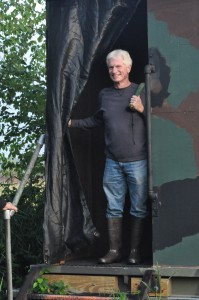 We waited as the morning brightened and the sun forced its way through the dissipating fog, the silence broken from time to time by the warbling song of sandhill cranes as they flew overhead. Then finally, the sound we’d all been waiting for—the gradually increasing buzz of the mosquito-like ultralight plane. A speck appeared in the sky and grew into an odd looking tricycle-like craft that set down at the far end of the runway and taxied to the front of the crane pen. The Trike had arrived. The training was about to begin. 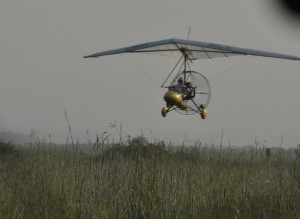 Seven young cranes, the “class” of 2014, are going through this year’s training in preparation for their twelve hundred mile flight from Wisconsin to Florida. Joe Duff told us that the tentative departure date this year is September 21, but bad weather may delay them. Recently, rain, fog and wind have kept the training flights grounded for several days. Each day without crane training extends the time of the migration south.  Between now and then, the youngsters have to be strengthened to be physically able to make the flight, and they have to learn to stay with the ultralight and obey the signals the crew gives them. While two ultralights accompany the birds in flight, a ground crew goes on ahead to set up one of the two pens for the night and make any other preparations necessary. As I understand it, there is a sort of hopscotching effect so that a pen is indeed awaiting the birds when they land wherever they land on their journey south.

The training sessions depend on the weather and may last anywhere from fifteen minutes to an hour with the plane making short runs up and down the grass run way, and the cranes sometimes following in formation, other times not. That has to be corrected before they begin their flight south to Florida. 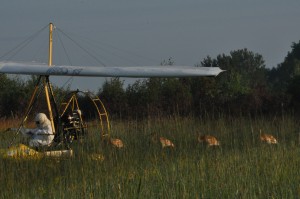 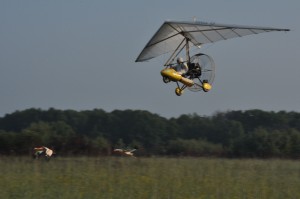 The crane handlers and the pilots wear their white gowns, rubber boots and  their white helmets any time they are interacting with the cranes. One arm of each of these white gowns ends in a crane’s head puppet that is used to reward the birds with grapes or meal worms when they’ve finished  flights up and down the run way. The hand puppet delivers the food just as a mother crane would. 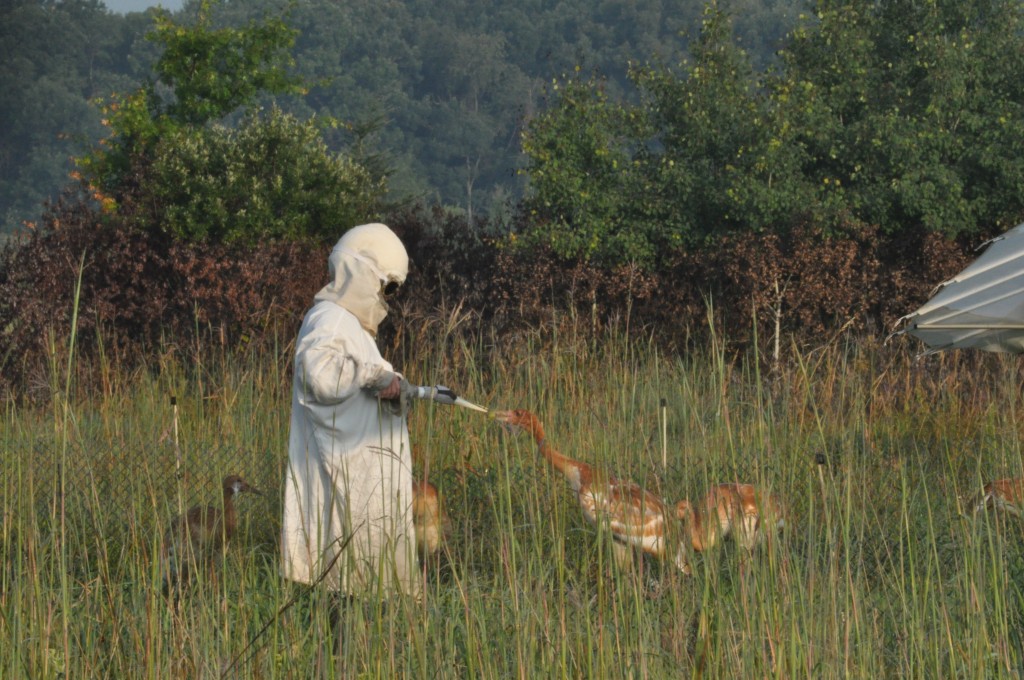 A surrogate crane mother and child.

(Side note: The Operation Migration web site has an archive of its blogs. One of my favorites is  “The POWER of the Grape,” written by Brooke Pennypacker. You can find the archives here: http://operationmigration.org/InTheField/category/aircraft-guided-migration/.)

In between training flights, the birds demonstrate their personalities, each unique. This fellow below caught our attention. We named him Trike Wing Inspector. 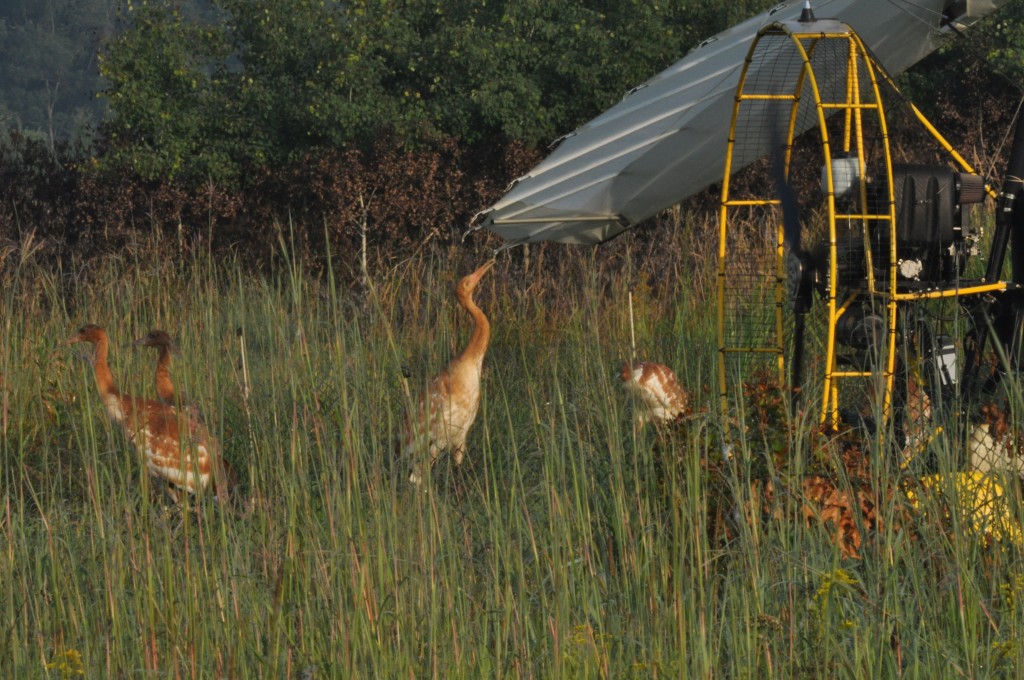 The trip seems a dream already and we’re only a brief time away from slogging out to the blind and sitting on a too hard bench with our knees at an uncomfortable angle. But oh, the magic of the birds as they come out of their pens and eagerly follow the ultralight and then cheerfully return to their pen until the next time. The charm of them is intoxicating, addictive. They seem like the first true innocents with absolutely no sense of self preservation, a serious problem for the conservationists trying to save them.

In spite of the problems and set-backs, this dedicated crew  continues the good fight. Each successful flight from Wisconsin to Florida is a victory in and of itself. String enough successful flights together, and we’ll have a self-sustaining population of whooping cranes following the Eastern flyway to their nesting habitat.

My own knowledge of this amazing  effort comes from our trip to the White River Marsh and the information I’ve gleaned from the Operation Migration web page http://operationmigration.org/.  A concise history of the  origin of the organization is there along with a look toward the future. To quote from the web page,  “In 2013, WCEP (a group of organizations committed to the cranes) completed an 18 month long Structured Decision Making process that used Population Viability Analysis and algorithms to evaluate this reintroduction. It was determined that the best chance for the population to persist is to keep reintroducing birds into the Wisconsin rectangle for the next five years.”

Some morning when you wake early, check out the organization’s webcam. You may get to see something amazing and wonderful, depending on the weather. Or better yet, join the group for the Crane Festival to be held in Princeton, Wisconsin September 12-14. And be sure to follow the young cranes via the webcam as they fly home to Florida through late September and October.